While Dollar was sold off overnight, the decline was less severe than originally expected. Indeed, the greenback is currently just the second worst performer for the week, following Swiss Franc. The rally in commodity currencies was also less than convincing with Kiwi and Loonie as third and fourth weakest. Yen is currently the strongest, with help from narrowing yield gap. Euro, is next strongest while Sterling and Aussie are mixed.

Technically, USD/JPY’s break of 129.49 support indicates resumption of the decline from 151.39. Development in EUR/JPY and GBP/JPY also suggest that near term rebounds have completed, and retest of 137.37 and 155.33 could be seen next. Similarly, CAD/JPY could revisit 95.38 soon and AUD/JPY could follow and head back to 87.00. 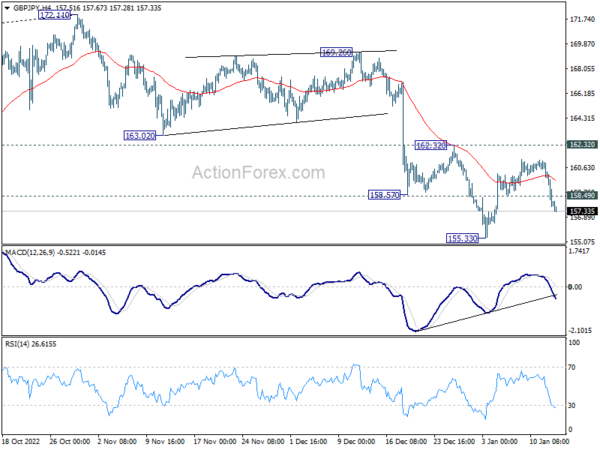 St. Louis Fed President James Bullard said yesterday that it’s “encouraging” that inflation “went in the right direction.” “So far, so good. My bottom line for 2023 is that it will be a year of disinflation,” he said”. Yet, he emphasized his preference is still to get interest rate to above 5% “as soon as possible”.

“There’s probably too much optimism inflation is going to easily come back to 2%. That is not the history of inflation,” Bullard said, “We are really moving into an era of higher nominal interest rates for quite a while going forward as we try to continue to put downward pressure.”

Sepataely, Atlanta Fed president Raphael Bostic told CBS that the December inflation data was “welcome news.” “It really suggests inflation is moderating and that gives me some comfort that we might be able to move more slowly,” he said.

Fed Barkin: Inflation to be more persistent than a simple drop to 2%

Richmond Fed president Tom Barkin said he was “in concept supportive of a path that is slower but longer and potentially higher” depending on how inflation behaves.

But he cautioned that while the average inflation dropped, “the median stayed high. He said. “That’s because the average was distorted by declining prices for goods like used cars that escalated unsustainably during the pandemic.”

Regarding the median inflation rate, “if the center of the distribution remains above our target, then I think we should continue to move rates,” he said. “Inflation is going to be more persistent than a simple drop down to 2%.”

BoE Mann: Bringing inflation down may require a significant recession

BoE MPC member Catherine Mann said yesterday that she’s “worrying about… underlying inflation dynamic looks pretty robust right now.” She explained that past rises in energy prices and other inflationary pressures are getting passed through higher prices of other goods and services.

“Our job is to bring that back to 2%.” She added that may require a “significant recession”. But, “getting inflation expectations under control, keeping them under control, is important.”

USD/CNH extended the decline from 7.3745 this week on Dollar’s broad based selloff. Nevertheless, it’s sitting close to an important support zone around 6.7159 (61.8% retracement of 6.3057 to 7.3745 at 6.7140). Considering oversold condition in daily RSI, a rebound should be due. Break of 6.7989 resistance will indicate short term bottoming, and bring rebound. But considering that the falling 55 day is now at around 6.9768, there is little…

Forex and Cryptocurrency Forecast: Five Days of Storms and Tsunamis

EUR/USD: Next week: Five Days of Storms and Tsunamis It seems that the whole world celebrated the Chinese New...

USD/JPY at 126 Support with Wedge Formation

USDJPY came down at the end of 2022, breaking to even lower prices in the last few weeks after...

CPI data was the highlight from last week as inflation continues to slow in the US. That should continue...

US inflation data promises to directly impact Fed policy, to which the Nasdaq100 is the most sensitive among key...

Over $17M in restitution ordered for victims of cryptocurrency fraud

Inflation rises at fastest pace in 40 years, pushed up by record gas prices

Fed Will Start Reducing Asset Purchases in Coming Weeks. Not in a Rush to Raise