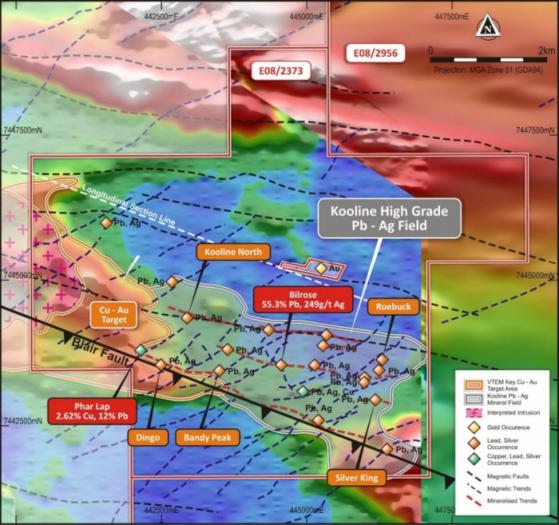 At Kooline, re-processing and interpretation of geophysical data has identified the potential for a large intrusive related silver-lead to copper-gold system immediately along strike.

The tenements include the previously mined high-grade lead-silver +/- lodes of the Kooline Mineral Field where previous rock chip sampling of exposed lode structures produced grades of up to 55.3% lead and 249 g/t from the Bilrose workings and up to 2.62% copper and 12% lead from the Phar Lap workings.

“Drilling in next few months”

He said: “We’ve harnessed about 50 kilometres of the structure, and we’re pretty well mineralised along most of it.

“So, we’re very optimistic about the prospectivity of the project.

“We will now engage a structural engineer or geophysicist to mark the spot, or spots, where deep holes need to be drilled – then we could be up and drilling within the next few months.”

The key target area includes VTEM conductors within a 2×2 kilometre area, that correspond with an area of deep erosion/transported cover immediately along strike from the silver-lead workings.

This area is essentially untested and a series of deep pre-collared diamond drill holes have been planned and approved by the WA Government for Exploration Incentive Scheme (EIS) with co-funding of up to $150,000 direct drilling costs.

The drilling will target both high-grade extensions of the silver-lead lode structures as well as copper-gold mineralisation closer to the interpreted intrusive.

At the Perenjori Project, the company has engaged MinRizon Projects Pty Ltd to complete a high-grade production study.

The study will be based on the previous (JORC 2004) inferred mineral resource estimate by CSA Global of 191.7 million tonnes at 36.6% iron, released by Quest Minerals Ltd (ASX:QNL) in 2013 and will build upon a scoping study completed by Mintrex Pty Ltd.

Nikolaenko said: “Perenjori is a multi-faceted locality in terms of mineralisation.

“We’ve got a large landholding, we have seven tenements of varying sizes and each tenement has its own prospectivity.

“We’ve engaged MinRizen to do a report on it for us and hopefully that will be completed in the next couple of weeks.

“Once we have that report, we’ll be able to take the next step and commence drilling and upgrading the resource.”

Based on the outcomes of the study, the company will look to upgrade the resource to JORC 2012 indicated status through additional drilling, to allow feasibility studies to proceed.

Nikolaenko said: “Perenjori also hosts a number of other tenements that are highly perspective for gold and they’re on our shopping list to commence work on.

“We have just finished flying another large tenement to the northwest which we’re quite excited about as it hasn’t been explored in the past.

“It’s got an unbelievable magnetic signature, over a distance of about 20 to 25 kilometres.

“It’s early days, but we are progressing with that and several other prospective tenements at the project.”

The Yidby Gold Project is also shaping up well with the first five of 18 holes completed in the current phase of drilling at Yidby Road Prospect hitting thick, high-grade gold intersections.

Oil dips, but hovers near 2023 highs on China demand optimism

This woman is riding around the world with her dog

If you're not sure where to start when looking for the next multi-bagger, there are a few key trends...

Insiders who bought AU$252k worth of Elmore Limited (ASX:ELE) stock in the last year have seen some of their...

How to cure a holiday debt hangover By Reuters

alvarez Background Each year I write an article on my previous year’s portfolio performance. For last year’s piece, please...

This woman is riding around the world with her dog

On-chain analytics point to an accumulation phase for Ethereum